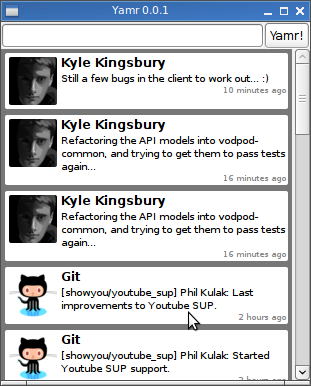 Sometime in the last couple of weeks, the Yammer AIR client stopped fetching new messages. I’ve grown to really like the service, especially since it delivers a running stream of commits to the Git repos I’m interested in, so I broke down and wrote my own client.

Anyway, feel free to fork & hack away. You should be able to build ruby-webkit without much trouble on ubuntu; I’ve included directions in the readme. It’s super-basic right now, but most of the core functionality is ready to start adding features. Enjoy!

Thanks! Exactly what I needed!

This would be perfect, if only I could get it working.

Currently, I get Authorization Error: “The application Yamr can not be authorized in your network. Please contact the application author.”

Yeah, that’s been broken for several months. You’re welcome to tear open the oauth code and submit a pull req on github if you like. I spent an hour with it a while back and got nowhere.

Hey James, sorry, but I haven’t used Yammer in a few years. Haven’t had the time to maintain this client since. :-/

I’ve got it working with the gtk-webkit-ruby gem: https://github.com/brad/yamr Kyle, if you aren’t planning on maintaining this any more, can you remove your app from Yammer to free up the namespace?