I’m supposed to be working on some distributed feed stuff tonight, but dammit, this song is incredible and I want to think about it.

Imogen Heap is a musical genius. Whatever you think of her particular style, voice, lyrics; one has to admit that anybody who can sit down and invent an eight track song to any suggested melody, in any key, beat, and meter, on the fly, understands music.

My favorite track of hers is “The Walk”, from Speak for Yourself. When I visited my best friend Ryan and we were catching up on each other’s last eight years of music, we stated this in unison. In fact, everyone I’ve asked seems to agree: it’s a fantastic piece of music. Why?

In high level terms, it’s easy to understand. She’s combined a furiously interesting lyrical thread with multilayered instrumentation, and dropped it into E♭ minor, of all things. The key alone sets it apart, but she goes on to introduce some really interesting textures and a fascinating vocal contrast. The meter is relatively stock 4/4 and the tempo is sensibly driven; no surprises there. The instrumentation itself is worth a note, though.

On repeated listening, you can draw out some beautiful little sounds: that haunting sirenlike keyboard, a second piano, the harsh buzz for the baseline, synth harps used as percussion, and little whooshes, snits and zips punctuating the mix. There’s a harshly distorted electric guitar pushing its way through the climactic midpoint, and it comes back as a rising wave of noise to break into the final chorus. We’ve also got a zither, the usual electronic drum beats, and… a xylophone? Muffled wind chime? What is that first instrument? 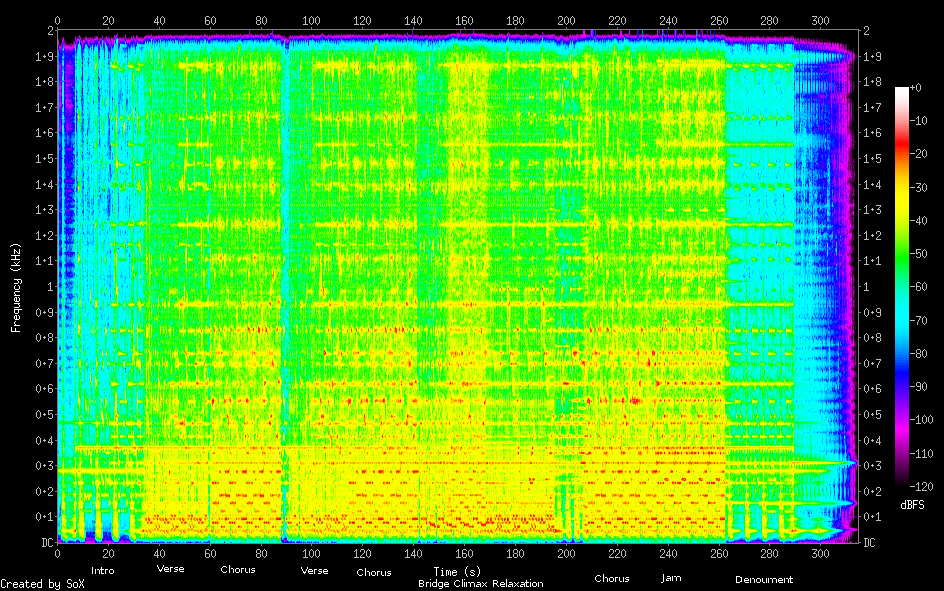 It’s also got a fascinating structure to it; something I enjoy about almost all of Imogen’s works. Notice that the first piano melody encountered, and used as a theme throughout the song, is a rising couplet. Actually, four of them: aAaAaAaA. Similarly, there are four major blocks to the song, each divided into a low and high intensity half; with the exception of #3, which is further subdivided into an aAbB sequence.

The first two major blocks are verse and chorus. Then a brief silence at 60 seconds, and a second verse-chorus pair. The instrumentation is pretty much the same through these. Then things get really interesting: there’s the breathless climactic lines at 2:20, (again, in a low/high pair), and a haunting fall appearing four times from 2:50 on. It only shows twice in this spectrogram since this is only one channel, and it’s mixed as a right/left pair.

Notice the guitar distortion appearing as high-bandwidth noise throughout the whole frequency range at 2:35. The spare instrumentation around “freeze—awaken forever” is especially neat as well; you can see the lower harmonics of Heap’s voice sliding down through the spectrogram at this point.

These lines are some of my favorites as well,

It reads like the chatter of a starship A.I. engaged in battle. In this context “You’re as close as it gets without touching me” and “I feel a weakness coming on” evoke the unplugging of HAL9000 from 2001: A Space Odyssey. I still interpret this as the surrender under fire of a noncorporeal system, a theme interwoven with the fundamental wrongness of having control over one’s own state subverted. “I don’t want to feel like this”. It’s a perfect fit for the darkened key signature.

Yeah, I know, it’s probably about falling in love with someone you don’t want to, but this mapping of the story is just so much more interesting.