I finished my tattoo last night. If you like puzzles, here’s a primer for the language, and the design itself. You’ll need some basic algebra for the primer, and a little domain knowledge–or a few Google queries–for the tattoo proper. 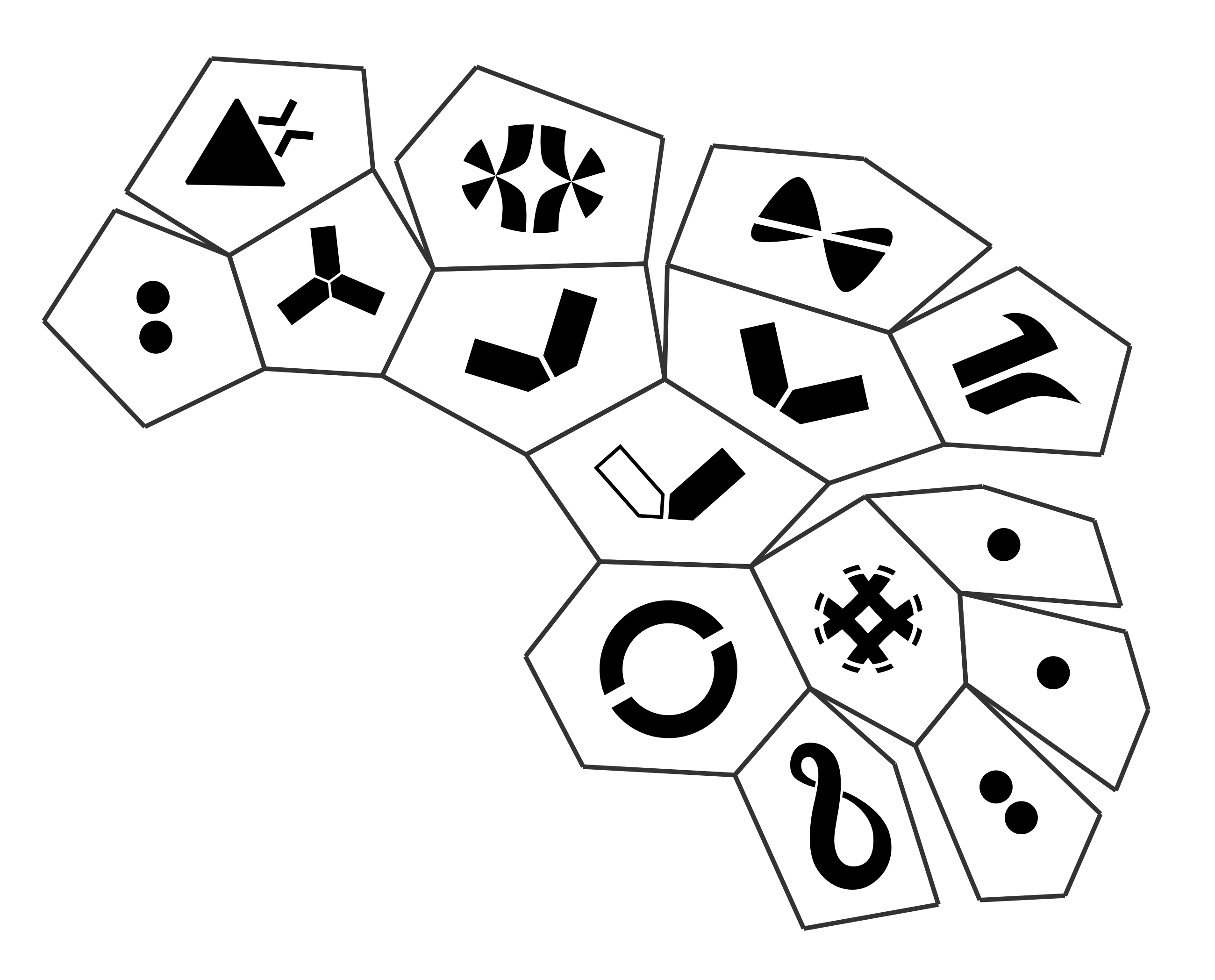 Orientation and scale are not important.

The positions of the twenty-eight primer expressions are not important, but I’ve arranged them suggestively to make the puzzle easier.

Each group of four expressions in the primer has a particular symbol in common.

Do the connected cells in an expression ever form a loop?

Which glyphs appear in black? Which have outlined counterparts?

Can you relate glyphs by their component shapes?

How would you represent large numbers in this language?

What’s the densest circle packing in the plane? We’ve seen six dots. How would it accommodate seven dots? Eight? Nine?

How do rows in the primer relate to one another? How do columns relate?

The # glyph in the bottom right of the primer has little cut-outs.

What integer is closest to the square root of six?

The number in this tattoo is something any physicist would recognize.

One solution for a planar light wave involves sinusoidal electric and magnetic fields at right angles to the direction of propagation.

I wish :hover worked on phones (or whatever you used for spoilers).

@elmigranto you should be able to select text, which is how it works on the browser

Kyle this was a really fun puzzle! Can’t say I solved it, but the fact that I was able to get some of the syntax figured out with your hints has brightened my day.

what a wonderfully pointless time sink. I love(d) it. Kyle, if you see this and a)read it, b)comprehend my lexical sputum, and c) have a few minutes to confirm my interpretation of the expression with the symbol similar to infinity and what looks to be pi, but had (given the interpretation posited) to represent some relation of planck’s constant (dirac const perhaps?), I would appreciate the effort tremendously.

irrespective of response. thanks for the quandry. i hope i fall to sleep counting !‘octal dots’.

so in the actual tattoo one thing (which seems to be a fraction of two terms I still have to figure out) is equivalent to other two… I get the octal but the ‘little cut-outs’ still puzzle me extra hint?

The 211 makes it kind of obvious; from there it’s just a matter of working backwards and interpreting the other symbols. I really liked reading the primer, though, it reminds me of one of those “how would you teach an alien mathematics” thought experiments.

Oh, thee Cosmic Galois Group, arithmetic of physics, numerology of constants, harmony of the spheres. I like it, though I wasn’t ever able to pinpoint any such emblem for myself anxious over abundance of deep and trivial choices of which one really is an aspect of another (and also since having heard of one physicist’s hand towels crested with Dirac equation).

Symbols are most touching in all this, especially the bowtie, and the conformal mapping, and the action prism. Choice of cell shapes though, and their eventual algebra, remains mysterious.